skip to main | skip to sidebar

Doi'ng is the ONLY way of getting things done

An inspiring message , please "DO it now or never " ..

Click here
Posted by Srihari at 10:37 AM No comments:

Normally we talk about our parents reaching their 60th birth anniversary and we perform rituals called the Shasti-Abtha-poorthi which actually means celebrating the 61st birthday termed a very auspicious occasion.. Now it time for India to perform the rituals .. India from the day it had got its independence has been living in a world of secularist democracy , with multi lingual , multi caste and under the rule of bureaucracy's .. She has gone through a glorious transformation from the day where the then PM Jawaharlal Nehru gave the famous "tryst with destiny" and the day when current PM assures the country to enrich people with knowledge , to bring in the concept of "aam admi" , to extricate corruption and extremism in the form of terrorism ..

India has turned 60 and has got a senior citizen status where other countries will look forward to india on providing resources and knowledge power.. India has moved up the ladder in the past decade or 2 to see her competing alongside China in the global economy. India @60 has seen the tranformation from colonial rule into a modern, industrialising, knowledge-based economy within the framework of a liberal and secular democracy. "In the past 60 years, people moved to where work was available; in the next 60 years, work must move to where people live."

SO guys/ gals just give few points on "Why you love being in India" also on the contrary give "Why you hate being in India" .. "Or reforms needs to be done from Now ??"
Posted by Srihari at 12:10 PM 6 comments:

Ohh ahhh , Wat a goal , hits the Cross bar , watta save from the goalkeeper , and finally with all the excitement to the '07 Season , Red Devils walks away with the premier league .... Its has seen the likes of Ronaldo , Essien , Cesc fabgregas coming up the ladder and giving great performances for their club teams ...

But wazz the suprise this time around ?? The Red Devils have gone all guns blazzing for the pre season talks and transfers .. Sir Alex ferguson is leading them to record 21st season and the confidence within the team has soared to great heights in chase of their title defence .. They have gone for their piece of cake with the transfers of Owen Hargrevas from Bayern Munich along with the Tevez seems to have filled a few holes in the team.. The Red Devils played an outright game from start of the season with a few hiccups here and there... The likes of Ronaldo (who in standards seems to get the player of the year in sometime from now) , vidic , Carrick , Fletcher with the help of old horses like Scholes, Giggs , Ferdinand earned them a title..

I have chosen my pick for this season and its "The Reds" (Liverpool ) who will come out strong from the rest of the pack.. Wat makes them special ??? Everyone reading this might be laughing for sometime , but i believe they would prove you otherwise.. Is that about to change? Even from 12,000 miles away, I can sense a huge wave of optimism around Anfield. The summer signings, the unveiling of the dramatic stadium and the statements of various players in the media and through this website have all encouraged a belief among fans like me of great things to come this season ..

They have made the best signings for this season , Fernando Torres , benayoun ,Andriy Voronin all seem to great prospects for "The Reds" winning this season ..

They have got the most influential players in the league , Pepe Reina, Jamie Carragher , Steven Gerrard (forget the MBE, he's Sir Steven in my house) in my dictionary ..

The important priority is to get off to a good start and when the transfer window opens again , rafa will do the talking..

Rafa like always be the best tatician when gambling with players and playing against big teams...

They have always for the past seasons started like a snail, lagging the title contenders .. Gerrard in his famous interview says "you may not win the title in the first few games but you can lose it then, and that's certainly what Liverpool have done in recent seasons"..

"You Will Never Walk Alone" - Liverpool

So Guys whomever you support , the best of football is rite here .. Just a day away for kick off.. Iam almost sunk in the pre match reviews and predictions which keep me even more engrossed than before .. I will be glued to my sets every other weekends hoping for the best in this season..

I was going through the rediff sports column and suddenly found an interesting article. Man United signs a 9 year old boy.. I have always been following the premier league for quite some time and news such as this one springs up as a big suprise ..

Just find the above link and check out how good he is for yourself.. He is named as a whiz kid and Manchester United have signed this gifted nine-year-old after his grandfather sent the Premier League champions a DVD showcasing the boy's talents which has become a YouTube sensation.

This young talent has a combination of pace and skills to tackle with great control over the ball.. Catching 'em young is the current saga of english football teams. Comparing them with greats doesnt fit into the scheme of things here and its never helped anyone to improve.. These guys are gifted with talent and he needs to be groomed properly to play at the big stage ..

So guys just sit back and watch the kid's prowess in dribbling and passing against an u-10 team ...
Posted by Srihari at 10:27 PM 7 comments:

Aussie have conquered the Essence of Cricket

I was the bewildered by the way aussies have dominated over the past decade and just check out this pic ... 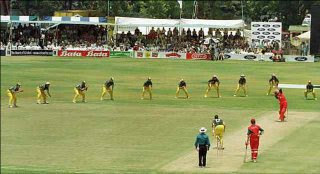 The above just says it all in one word ... Iam still wonder struck by the above pic.. windies used their body line and head line bouncers once to conquer the world in this sport.. But now where the sport has gone leaps and bounds , Aussies seems to be always ahead of the pack in any form of the game ..

Just find out where the rest of the players are ?? The answer is there aren't any fielders other than those on the slip cordon :) ... They have conquered the game and have shown this world how cricket is played professionally ,this might raise some eye brows!!! Anyways iam really awestruck by their selection and still wondering how a brand new player can perform his best on debut !!!

-> Each of the 14 members in the team are always fighting for a place .. Tells about the level of competetion within the team ..

-> A brand new player always perform to his best given the opportunity and cements hi s place in the side .. shuan tait , Brad hogg to mention a few)

-> Its always been a collective effort from the team and they compliment each other very well ..

-> The passion for the sport has never dried from their skin ..

-> The most important of them are the way they undergo rigorous training session and the selection is more transparent .. So there is no room for complacency here ..

-> They have developed as a good fielding side which improves the quality of cricket played..

-> They have always had the opponents thinking and make sure they are on top during the course of the game ..

Negatives:
-> Sledging has been part and parcel of Aussie cricket .. How many times have you seen Mcgrath and Brett sledge Lara ??

-> Apart from Shane warne they have never produced great spinners in the modern era , which will be a great challenge for them ahead..

-> The best strategy to beat them to keep the basics right and always make ricky ponting thinking .. The match @ eden gardens when India played Aus in 2002 was one of the best match i have witnessed in my career ..

-> Play to your strengths and dont be a prey to them , they would just stamp the authority ..

It been an Windies domination in '80 where the greats of Lloyd , Roberts, Richards , Marshall showed the world with their speed and bounce...

And Aussies have come back with a bang to show cricketing world how well they apply themselves to situations with sheer aggression and all round team performance ..

We will have to wait and see who is going to topple them.. Lets play the waiting game!!!!
Posted by Srihari at 5:46 PM 6 comments:

Srihari
Student, Son, Warrior, Monk, Businessman, Strategist , Cricketer , geek(sounds weird) ...who else am I? I'm still finding out... So effectively this blog space will help me find out who Iam ..It highlights my experiences, opinions & other random gibberish. No exaggeration, no shams...!